Who sabotaged objectives of demonetisation? 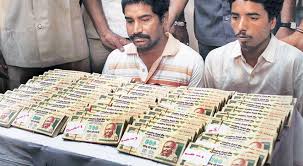 Who sabotaged objectives of #demonetisation?

(I had written this article originally written on Dec 17, 2016. It is reproduced here because people continue to ask why currency notes worth only about Rs. one lakh remained unreturned.)

In 1966, when I was a probationer at the National Academy of Administration (now called Lal Bahadur Shastri National Academy of Administration), Mussoorie, Shri V. V. Badami (now late), Director of National Academy of Direct Taxes, Nagpur, was invited to address probationers of all Services. In course of his brilliant lecture, he narrated a very interesting story. A hunter went deep in a forest with his gun to shoot a tiger that had become a man-eater and was playing havoc in the villages near the forest. As soon as he spotted the tiger, he aimed his gun at the target and fired. He missed his aim because the tiger had also seen its prey and had jumped to attack the hunter. The tiger too missed the target because it had taken a long jump, going over the head of the hunter. Back from the forest, the hunter practised for a couple of days to perfect his aim. When he had attained sufficient confidence, he went back to the forest in search of the man-eater. There he saw the tiger practising short-jump!

The moral of the story is that law-breakers always try to outsmart law enforcement agencies.  This is what they are trying today to frustrate the objectives of Prime Minister Narendra Modi’s attack on everything that is ugly and dangerous in India – black money generated and accumulated by corrupt, counterfeit currencies and activities of criminals, from terrorists, naxalites and drug and human traffickers to local musclemen. Considering the shortage of new currency notes, the government kept several legal windows open till December 15 (it amounted to demonetisation in phases) and introduced rationing on withdrawals from banks and ATMs. Law-breakers did not take much time to devise short-cuts. The result is that while needy people are staring at “NO CASH” notices at banks and ATMs or collecting much less than their quota after long wait in queues,  hundreds of crores of new currency notes are being found in the possession of criminals and rich and powerful are able to get whatever they want and are easily converting their black money into white without standing in queue. The situation is very much like ration-card holders either getting much less than their quota or returning empty-handed after looking at “NO STOCK” notice on fair price shops while the supplies meant for them are illegally diverted to market.

When supplies are not available at fair price shops, the first target of people’s anger is shop owner. Similarly, when people are not getting their quota of new currency notes after demonetisation, the first target of their anger is bank. True, as being reported by media every day, many unscrupulous bank employees are obliging their favourites (often for a consideration) by adopting all sorts of unfair means: keeping good part of stock of new currencies for the rich and powerful, opening new bank accounts in fictitious names or in names of shell companies, allowing misuse of ‘Jan Dhan’ accounts of the poor, etc. etc. Some enterprising bankers are running parallel banks, away from bank branches. A couple of days after the demonetisation, I came to know of such a parallel bank. An acquaintance of mine (call him AB) who urgently needed several thousand rupees explained his problem to his acquaintance in a large public sector bank. AB was advised to come to a place away from the bank branch with three cheques of ₹24,000 each. At the specified place AB handed over cheques to his acquaintance and collected cash. That banker was nice enough to explain the modus operandi. If 25 employees of a bank withdraw ₹24,000 each from their own accounts, a corpus of ₹6 lakh is created. With that corpus, a trusted bank employee virtually runs a parallel branch at a secret place, on a smaller scale though. He dispenses cash to and collects cheques from favourite customers. He also collects old currencies to be deposited in customers’ bank accounts. When the corpus is exhausted, he returns to the branch; old currency notes are deposited and withdrawals are made against cheques collected. The corpus is again ready for the next round. That explains why rich and influential people are not found in the queues. In this season of demonetisation, KYB (Know Your Banker) is more important than KYC (Know Your Customer). Mounting burden of NPAs (non-performing assets) is result of coy relationship banks have maintained with rich and powerful at the cost of common people.

However, such actions of bank employees cannot explain availability of new currency notes worth crores of rupees in running vehicles, bathrooms, offices and homes across the country soon after demonetisation. It defies logic that large number of crates full of currency notes can be smuggled out of large number of bank branches across the country to be handed over to politicians, businessmen, hawala operators and other criminals. As in the case of diversion of supplies from fair price shops to market, diversion of new currency notes to unscrupulous persons is possible only when leakages are taking place at several places along the supply chain. Supply of currency notes from four note printing presses – one each in Eastern, Western, Central and Southern India – to lakhs of bank branches and ATMs   throughout the country requires careful logistics and supply chain management under police protection. The drawings presented below will give an idea of the supply chain. 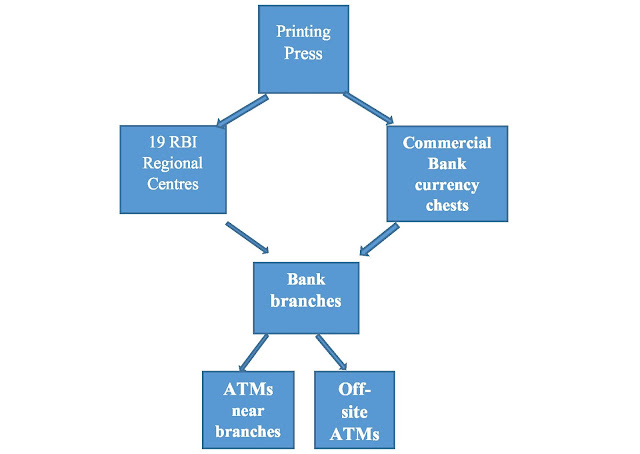 There are elaborate procedures for taking money out of printing presses to the nearest chest and from there to various banks. Currency chests are extended arms of the RBI. When bank premises are used as currency chest, banks do so on behalf of the RBI. For short distances, currency notes are transported in specially built trucks. Railways are used for long distances. (Post-demonetisation Air Force planes and helicopters have also been used.) RBI officials accompany when notes are transported from the RBI to chests. Each bank is responsible for movement from bank chest to a branch. Banks take the services of cash-in-transit companies for transportation from currency chests to their respective branches and to (nearly 150,000) off-site ATMs. Police protection is a must for each movement. ATMs attached to bank branches are filled with cash by bank officials.

Every movement is well documented to avoid any misappropriation. To maintain the secrecy of movements, Regulation No. 33 of the RBI (Staff) Regulations, 1948, requires that “every employee shall maintain the strictest secrecy regarding the Bank’s affairs and affairs of its constituents and shall not divulge, directly or indirectly, any information of a confidential nature either to a member of the public or of the bank’s staff, unless compelled to do so by judicial or other authority, or unless instructed to do so by a senior officer in the discharge of his/her duties.” The RBI has a Central Vigilance Cell headed by Chief Vigilance Officer (CVO) at Mumbai to undertake preventive vigilance and anti-corruption measures as also investigate complaints /allegations having vigilance angle against the employees of the Bank.

Under such a system, illegal diversion of new currency notes worth hundreds of crores of rupees after demonetisation is not possible without the connivance of officials of the RBI, commercial banks and police. It is quite possible that what has been detected so far is only part of the stolen treasure. It is also quite possible that part of the stolen treasure fall in the hands of naxals and terrorists.

The government must order CVOs of the RBI as well as commercial banks to conduct inquiries into each movement of new currency notes to identify the instances of diversions and persons responsible for that. If CVOs cannot do that, there is no point in having such an institution. Detailed external audit is also necessary. Incidentally, the Comptroller and Auditor General (CAG) of India has not been authorised to audit the RBI. The RBI accounts are audited by auditors appointed by the Central government under the provisions of the RBI Act. A few months back the present CAG had suggested that the RBI should also be audited by his organisation.

Enquiries should also be made whether such thefts or illegal diversions of currency note were taking place in the past also.

Modern technology can ensure safe transportation of currency notes. Government should seriously consider using serially numbered unbreakable boxes fitted with GPS tracking chips and digital locks which can be opened only with the help of codes kept in encrypted form and communicated only to persons authorised to open boxes in the presence of  authorised witnesses.

I am a common man. I don’t expect you to read or bother about what a common man writes. Yet, I could not help writing this letter. I know, you are a very busy person. I have tried to be as brief as possible.

Sir, you are one of the foremost industrialists of this country. Whatever you say carries weight. Naturally, what you stated at an award function in Mumbai on November 30 about your impression of the UPA government and the present government has attracted a lot of attention.

You stated that in UPA 2, industrialists could criticise anyone but now there is an atmosphere of fear and people are afraid to criticise the government. I understand, you are worried about the falling growth rate of the economy.

Sir, I want to ask a few questions:

Sir, recently some powerful industries have been arrested. Extradition proceedings are going on against some big names who looted money and fled India. Hope, you will not cite examples of those who are being investigated for their economic offences in support of your allegation.

Hello, my name is Devendra Narain. I live in Gurugram, Haryana, India. I write serious blogs as well as satires on challenges before us.